How to efficiently manage a decentralized workflow across the globe 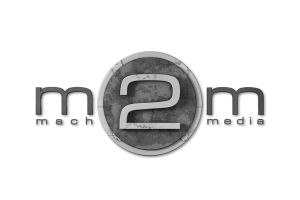 A multitude of editors, spread across 24 countries. Enormous quantities of footage, captured with over 50 cameras around the world. One producer in Cologne, Germany, another producer in London, UK, both responsible for supervising the production and post-production of 68 episodes of a global TV show. This real-life scenario describes just roughly the scope of production of the latest season of the television show GT Academy, an initiative by Nissan and Sony PlayStation, presenting video players with the once-in-a-lifetime opportunity to become a real-life professional race car driver. The television show around this immensely popular international virtual-to-reality contest follows every qualifying race all the way to the final showdroughown.

Mach2Media, award-winning full-service production house located in Germany and the UK and specialized in developing and realizing high-end concepts and designs for sophisticated and renowned sports events and shows, had served as the production company for the German edition of the GT Academy series for the past three years – and had managed to establish an unmatched benchmark for high-quality which GT Academy now wanted to adopt the same standard of programming to all other of the 24 participating countries. Hence, Mach2Media was selected as the worldwide production company for the 2015/2016 season of GT Academy.

The entire GT Academy project was managed with one ELEMENTS ONE as the central storage – and all editors worldwide contributed their assets from afar.

Just a few years ago, an ambitious endeavor like this inevitably would have called for a lot of travel expenses, especially during the post-production phase. However, Mach2Media chose a more innovative solution to rise to the challenge: ELEMENTS ONE all-in-one server and storage solution with its unique Media Library, a comprehensive web-based workflow management feature set that provides a fully intuitive graphical user interface for professionally managing, presenting and sharing media assets. Eliminating the necessity to perform any time consuming transcoding or copy tasks first, the embedded Rough Cut Editor allows for editing original film material remotely via the HTML 5 platform. With the Media Library being fully intuitive and easy to use, editors working on the GT Academy project were able to jump right in without any training. 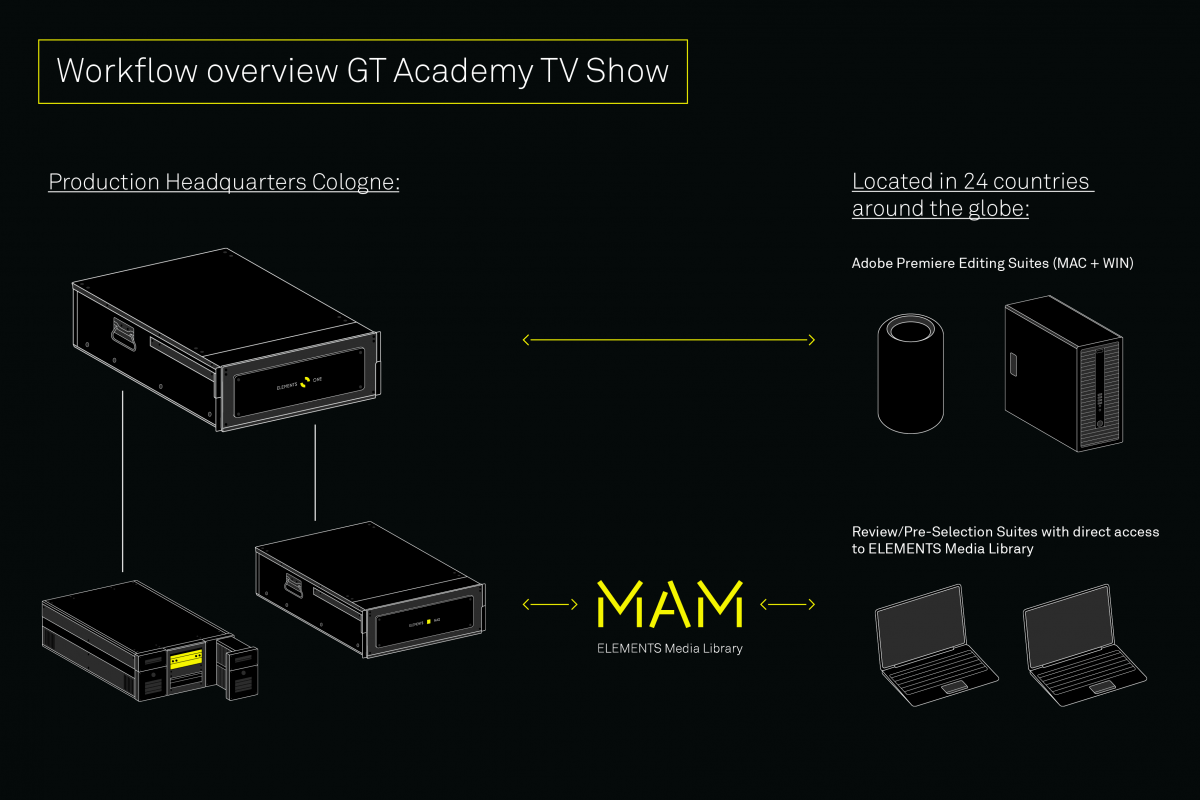 As the command center located in Cologne, Germany, ELEMENTS ONE provided easy and secure 24/7 access to all media assets, and enabled the international team of editors worldwide to share media files natively across all platforms and applications. While this unique functionality by default even embraces Avid, usually not allowing native project and media sharing, Mach2Media leveraged the feature to share the project amongst their editing application of choice, Adobe Premiere Pro.

But sharing media files and even entire projects natively is just part of the story, as Mach2Media truly exploited the full scope of capabilities and unique benefits of ELEMENTS ONE and Media Library.

Master templates for the show, stored in the Media Library on ELEMENTS ONE, ensured consistent high quality for all 68 episodes.

With all shows being locally recorded with over 50 cameras, including RED Epic, Sony PMW-F55, Sony PXW-FS7, a video drone and 30 GoPro Hero4, generating a lot of footage every day, it was not an easy task to apply the high-quality standard established in the German edition of the show to every single international episode. But with ELEMENTS Media Library, Mach2Media was able to create and deploy three “show master templates” to the international team of editors to load their local content. The entire process is facilitated within the fully-featured Media Library Rough Cut Editor. Once the local content was loaded, the producers and post production supervisors in Cologne previewed each episode and left comments within the same file in the Rough Cut Editor.

As the editors had to start indexing the footage immediately after it became available, proxy images were critical to preview and select appropriate footage. All Proxy files, automatically created within ELEMENTS ONE, were linked to the original source material, which made it extremely easy to implement requested changes fast and effortlessly. With ELEMENTS Media Library being fully compatible with virtually every professional editing application available today, such as Avid, Adobe Premiere, Final Cut Pro and others, operators on site can even execute the changes directly in any editing application.

In addition, Mach2Media leveraged the workflow automation option of ELEMENTS ONE, including automatic email notifications to an unlimited number of recipients and triggers to automatically initiate customized actions, such as moving files automatically to certain folders, streamlining processes significantly.

ELEMENTS Media Library provides a multitude of useful features on a HTML5 platform that simplify and enhance communication processes, such as frame-accurate comments and on-screen drawings on the source material, using any standard mouse or touch screen to point out certain issues. All these communication tools are standard components in the Media Library package and can be accessed from any standard PC or Mac anywhere on the globe which makes ELEMENTS ONE the perfect solution, without any third party components.

Despite the great distances between the numerous production locations, the communication and approval processes were prompt and easy thanks to ELEMENTS Media Library embedded in ELEMENTS ONE. Some of the unique features in the Media Library Mach2Media took advantage of:

Leaving unlimited comments and notes for any frame or clip to get instructions and wishes across based on the actual image – without the need of complicated explanations or potentially inaccurate time code references – simplified the communication significantly. All comments and notes were visible and accessible from any Premiere Pro workstation.

Pointing out issues with an image were easy by drawing directly on the image with the on-screen drawing feature provided by the Media Library – with any mouse or touch screen from any standard PC, Mac or tablet.

When Mach2Media realized that the originally deployed storage space of 43TB was not sufficient to execute the entire project, ELEMENTS was able to expand ELEMENTS ONE during operation without the need to shut down the system. The technical design of ELEMENTS ONE allows to add storage capacity even without conducting any data destructive tasks. Within hours Mach2Media had 96TB raw (or 86TB net) media storage space available, instead of 48TB raw initially purchased, by simply adding a JBOD expansion – on the fly and without any downtime.

For us this was almost a life-saver. Not only were we able to continue to work without any interruptions but we were amazed that we could double our storage space without doubling our investment!

Every regional race was recorded with over 50 cameras, including two RED Epic, Sony PMW-F55, Sony PXW-FS7, one (video) drone and 30 GoPro Hero4.

An international team of editors, located in 24 countries around the globe, required instant online access to the recorded video material, including on-site ingesting of new footage to the master template which Mach2Media had created to replicate the high-quality standard established in the German edition of the show. As the editors had to start indexing the footage immediately after it became available, proxy images were critical to preview and select appropriate footage. The final editing of the material was conducted on site using Adobe Premiere Pro CC, while the editors required both read and write access to the storage. As with every live-event, increased data security through automated back-up routines was critical in this decentralized real-time workflow. In addition, back-up on LTO tapes was requested.

The greatest challenge of this unusual setup and rather complex set of requirements was mainly posed by the need for a solution that would provide sufficient high-performance media storage space while, at the same time, grant simultaneous access to media assets an advanced MAM with enhanced features.

ELEMENTS‘ product range was able to provide everything they requested with only one solution.

The combination of ELEMENTS ONE all-in-one server and storage appliance with ELEMENTS Media Library, and ELEMENTS ARCHIVE with LTFS-support not only fulfilled the entire range of needs but added additional benefits, such as the option for workflow automation and increased data security.

ELEMENTS ONE, located in Cologne, Germany, managed two storage systems: one in located Silverstone (UK) with 41TB, another one in Abu Dhabi (19TB); the embedded user and rights management supports advanced and individualized user management. Both storage systems allow authorized users/editors to ingest footage remotely and access the assets from anywhere through ELEMENTS Media Libra

ELEMENTS Media Library provided access exclusively to accredited users, authorized through the embedded user and rights management tool. However, once a user has been authorized, he/she can leverage the entire range of features provided by the Media Library, including the Rough-Cut Editor, from anywhere and with any standard PC or Mac or any other device available.

Easy and fast creation of proxies

ELEMENTS Media Library enables users to set event triggers for every project folder within the MAM to automatically initiate customized actions. In this case proxy files were created automatically when new footage has been written to certain folders.

ELEMENTS has implemented an automated 3-stage back-up routine that guarantees data security. For an additional layer of security, the system provides the option to create unique token-based access keys that only the dedicated team member can utilize.

ELEMENTS ARCHIVE with LTFS support backs-up the data on redundant LTO tapes on a regular basis. Additional back-ups are conducted on an external NAS

When Mach2Media eventually reached the limit of their media storage space, the experts at ELEMENTS doubled the storage space by simply adding a JBOD expansion. ELEMENTS’ unique technical design made it possible to implement this extension without conducting any data destructive tasks, let alone shutting down the system: during operation the additional expansion was easily added, and within minutes Mach2Media had 96TB raw (or 86TB net) storage space available instead of 46TB raw they had initially purchased.

ELEMENTS deployed a solution that allowed Mach2Media to manage and supervise the production and post-production of a global TV show centrally from one spot, leveraging the various features of ELEMENTS ONE and the Media Library that simplified collaboration every step of the way.

The feature-rich server and storage appliance facilitated a sophisticated user and rights management to guarantee all authorized editors not only simultaneous access to the footage but let them share the entire project natively – without the need to conduct time consuming uploads/downloads or tedious transcoding tasks.

By creating a pre-defined “show framework”, the international team of editors were able to utilize the rough-cut editor embedded in the Media Library to ingest the locally recorded footage into the template – directly to the centralized storage ELEMENTS ONE. This unique option allowed Mach2Media to eliminate the need (and the costs) of travelling of both the producers and the editors. Mach2Media leveraged a lot wider variety of the features provided by the Media Library though. For instance, the embedded event trigger feature embedded in the Media Library proxies were created automatically as soon as new footage has been ingested to a particular folder, reducing both the manual effort and the potential risk of human failure significantly.

ELEMENTS is the only vendor capable to supply us with fast and highly secure storage plus a sophisticated, yet easy, user management. And ELEMENTS’ fantastic Media Library made a project of this scale possible at all.